Mat, Snoop and I spent the last week in Bundaberg. A town known for many things, rum, sugar, ginger beer and turtles. Got to say, it’s been friggin’ great. We had some rainy days but were glad not to be camping and it was never cold. Avoiding winter by continually driving north is working a treat so far. Staying in a house also allowed us to leave Snoop in a secure yard while we partook in activities unsuitable for doggies (e.g. snorkelling). Here’s the low down.

Airbnb does it again with a totally affordable farm stay.

Cost: $265/week not including the Airbnb service charge.
Location: 20ish minutes outside of Bundaberg

Situated on a large property with cows and horses on one side and a creek full of catfish on the other.

Well worth the money, especially when you consider the two free standard drinks and the end of it all. Mat and I both tried the Solera (top of the range at $179.95/bottle) and I tried a banana and toffee liqueur. The liqueur was super sweet but yummy and I imagine good with milk which was recommended. The Solera was smooth and I drank the whole thing straight on ice which, as a person who has almost never drunk rum, speaks for itself. We had quite a nice buzz after that and probably would have had another round if we didn’t have to head off to our Segway tour.

Segue Bundy, Sunset and Tapas Tour (I don’t know why but that’s the way the company spells it):

Riding segways is so much fun. I felt uneasy at first but once we got going it was so intuitive. The views were nice, the info limited and tapas disappointing, but riding segways is just really, really fun.

You know what else is fun but I’d never done before… SNORKELING! You know what sucks balls… spending two hours each way in a catamaran. We both were horribly motion sick travelling to and from Lady Musgrave. I guess it pays to follow the company’s suggestion to take travel sickness tablets beforehand. If a tour ever recommends taking travel sickness tablets, take the damn tablets. The snorkelling was, for me, the absolute highlight of this trip, for Mat, it was less enjoyable. What we have learnt however is that snorkel goggles and facial hair don’t mix. It messes with the seal. We’re going to look into some solutions because I cannot wait to snorkel again. The other unfortunate part of the trip (which I was expecting) was the overwhelming effect of bleaching of the Southern Great Barrier Reef. The entire reef was white except for a few dots of blue regrowth. It’s a sad to see but also important to recognise. 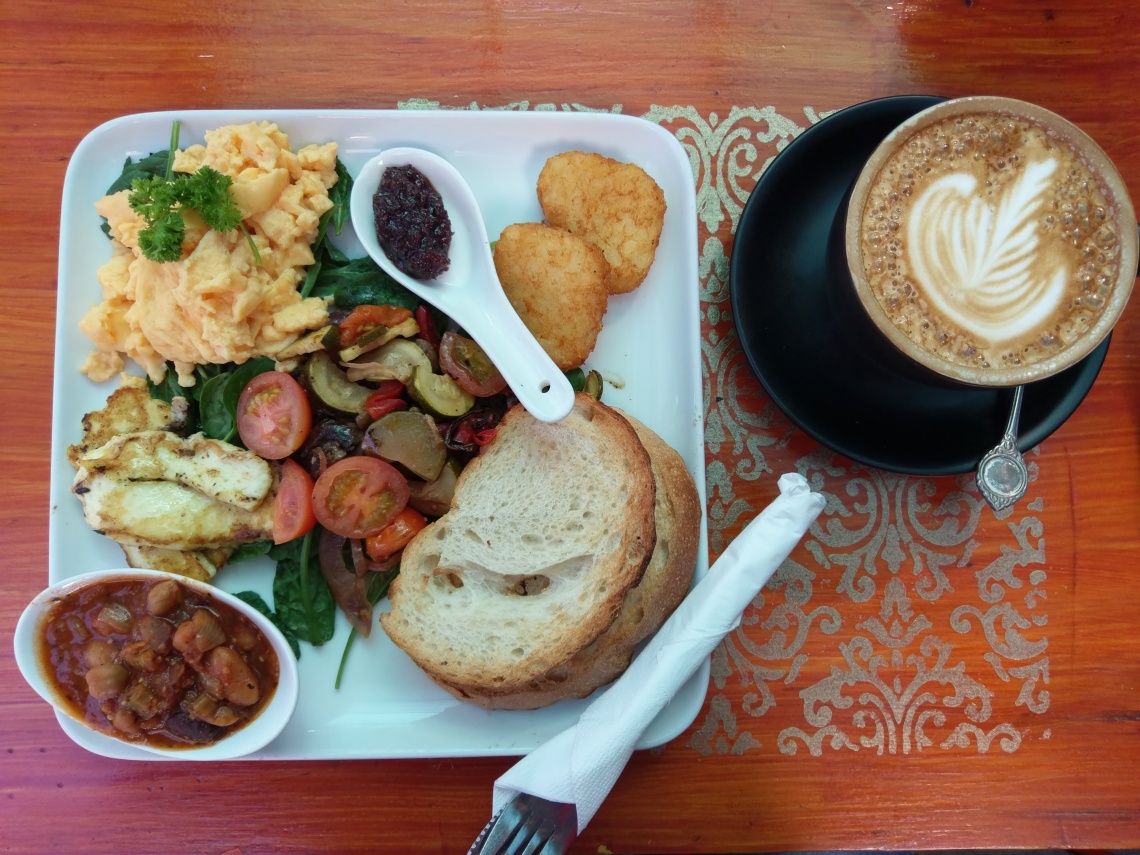 Went there this morning for breakfast. It’s got a great vibe and layout and the food ain’t bad either. Mat had the pancakes, I had the vegetarian breakfast (featuring haloumi and chili jam) and we both had big buckety flat whites.

This was definitely a highlight. Fresh strawberries and pineapple sweeter than we’d ever tasted. The smell was enough to set your mouth drooling. We also picked up a Hawaiian sweet potato which was unexpectedly purple once you peeled off the rough brown exterior and far sweeter than the usual orange variety.

Can’t say I’ve written much since we left Capalaba. I’ve made a few diary entries and wrote a rough draft for a picture book, but not much else.

Because internet has been spotty and we don’t have our next destination lined up I’ve also been reluctant to pursue freelance work but I have reached out to few people.

To keep things manageable, I only pack two physical books for this journey; A.S. Byatt’s Little Black Book of Stories and Gary Crew’s The Diviner’s Son. I’ve dipped into both but haven’t been gripped. I think when travelling and being constantly distracted or interrupted you need a book with a vivid plot, something that will hook you right away and keep you moving forward. This is why downloaded Neil Gaiman’s American Gods on Kindle. It helps that I’ve already watched the first two episodes of the new TV series and am keen to keep going. I also like the symmetry of reading a road narrative while living one.

Now We got to find our next home, possibly Wuruma Dam, until we can lock in a job and accommodation.

Here’s to the next adventure.