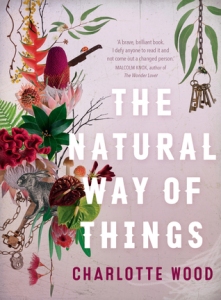 “In the days to come she will learn what she is, what they all are.”

Continuing in a tradition of dystopian feminist texts, which includes Margaret Atwood’s The Handmaid’s Tale, Charlotte Wood’s The Natural Way of Things has turned a lot of heads. Already nominated for the 2016 Victorian Premier’s Award for Fiction it is undoubtedly and impactful book which I found to be an engaging and propelling read.

While utilising enough poetic language and confrontational subject matter to be considered a literary novel, The Natural Way of Things remains easily digestible for those not used to the genre. And so it should be, as to broaden the discussion on such social, political and personal issues.

At first I struggled to find meaning beneath the artistry of this book, however I eventually settled upon the disconnect between the physical body and personal identity. Yolanda recalls her gang rape, “They had whispered things to her while they used her body”. There is a strong emphasis on the physical bodies of the women imprisoned throughout novel. As sexual objects and their transformation as their heads are shave, they sustain injuries, put to hard labour and, in one case, impregnated. The circling question seems to be are they the same as their bodies. Their various assailants think not, however their simultaneous mental and physical decline suggests otherwise.

This book is a treasure trove for different readings, all harsh realities drawn out of the very real world we live in. Worth reading if just to remind ourselves.